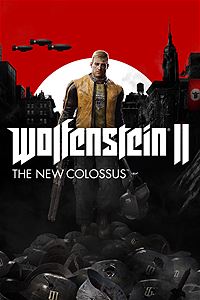 Since 1981, the Wolfenstein franchise has been about one thing: Shooting Nazis. It’s like peanut butter and jelly or nacho-cheese and chalupas. Wolfenstein and Nazi huntin’ go hand in hand. But, much to the surprise of fans of the series and the good people at Bethesda, that seems to have changed in 2017.

For those of you unfamiliar with the series, the games take place in an alternate timeline in which the Nazis had won World War 2. They follow William Joseph “B.J.” Blazkowicz, an American spy of Polish descent, as he blasts his way out of various military compounds, killing massive amounts of Nazis in the process. This tried and true formula has garnered success for the last thirty years, all the way up to 2015 with the release of Wolfenstein:The Old Blood. But, with the franchise’s latest installment, Bethesda is receiving some very unexpected pushback and criticism.

On October 27th , Wolfenstein 2:The New Colossus hits the shelves. And, with any other big- name release, massive advertisement campaigns have been launched to get people hyped for the new game. Bethesda took to twitter with clips and trailers that show Nazis marching in columns as the words “Not My America” flash on the screen. Another tweet simply says “Make America Nazi-Free Again,” and every message ends with #NoMoreNazis. Now, as this new installment seems to take place within the continental United States, many took the advertisements at face value and nothing more. But others took to the internet to angrily criticize what they saw as a shot against the current President, and the persecution of others for their political beliefs. In those people’s defense, Bethesda intentionally parodied Donald Trump’s own slogan with their own “Make America Nazi-Free Again” in order to stir controversy, and thus, attention to their new release. But, never in the developers’ wildest dreams did they think they would have to argue whether Nazis were bad. America fought an entire war against that kind of ideology and Nazis have been the go-to villains in American pop culture for decades. From Indiana Jones to Star Trek, it’s been pretty clear which side of the spectrum they fall on. LET ME GENTLY HUG YOU WITH MY FIST!

“We’re certainly aware of current events in America and how they relate to some of the themes in Wolfenstein II. Wolfenstein has been a decidedly anti-Nazi series since the first release more than 20 years ago. We aren’t going to shy away from what the game is about. We don’t feel it’s a reach for us to say Nazis are bad and un-American, and we’re not worried about being on the right side of history here.”

It’s a bit sad that Bethesda, or anyone, is forced to make such a statement this day in age and have it be considered “controversial.” But hey, welcome to America in 2017, where everything is suddenly politicized.

One thought on “Wolfenstein Takes Controversial Stance That Nazis Are Bad”