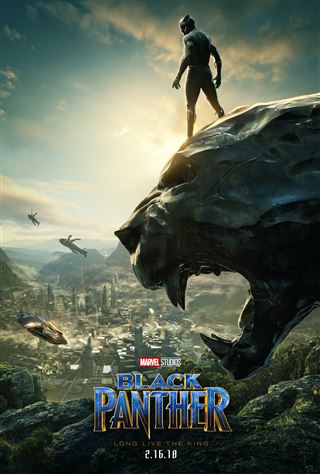 Strap in, dear readers. You’re about to see what a real review looks like. Not that C+ English paper nonsense from a nameless NerdFeed contributor with a weird fixation with pocket change.

I kid, of course. He’s a very talented writer or whatever.

Now, lets move on to why you’re here. Black Panther is the latest Marvel release and, unless you live under the densest rock on earth, you know it follows the Monarch of the reclusive kingdom of Wakanda. After the death of his father, T’challa is crowned King of his technologically-advanced homeland. The ceremony involves some hand-to-hand combat, some super-gross glowing flower juice and getting buried alive while visiting an ancestral plane of existence filled with dark, mono-chromatic jungle cats whose names escape me at the moment (Night Jaguars?). But he prevails and takes his rightful place as the leader of Wakanda. He soon finds out, however, that the sins of his father may spell ruin for their way of life and the world as we know it.

The film was written and directed by Ryan Coogler, of Creed fame, starring Chadwick Boseman as the Black Panther and Michael B. Jordan as Killmonger, the main villain of the story and also my current man-crush (I could do a whole week’s worth of laundry on them abs). But I digress… The African setting and culture brought a breath of fresh air to the Marvel Cinematic Universe, filling every shot with vibrant colors and new, interesting visuals. Wakanda and its people felt amazingly real. Both ancient in their customs and modern in everything else. No detail was too small to bring this culture to life in a fantastic stand-alone movie that will be thoroughly entertaining, even on the thirtieth rewatch. In fact, if Martin Freeman hadn’t shown up half-way through, I would’ve completely forgotten that this was a Marvel movie. The usual cast of heroes is nowhere to be found, giving Black Panther room to tell its own unique and engrossing story.

Don’t get me wrong. I am a huge fan of the Marvel’s shared universe of characters. But it creates a recognizable undercurrent in every production. You can see it and feel it. That same undercurrent can be found in Black Panther. But only on the periphery, giving this film a fresh and exciting note to it.

The performances were some of the best in the MCU as well. Micheal B. Jordan’s unending rage bring’s a gravitas, a palpable weight that can be felt. And Chadwick Bosemon’s solemn sense of duty, yet profound wealth of emotion, make these two infinitely fascinating to watch.

That one little complaint aside, I truly cannot recommend this film enough. It is fantastic. A sparkling gem on the otherwise bleak release schedule for the early part of this year.

But hey, what do I know? I could be wrong and you’ll absolutely hate everything about it.

Guess you’ll just have to find out for yourself.