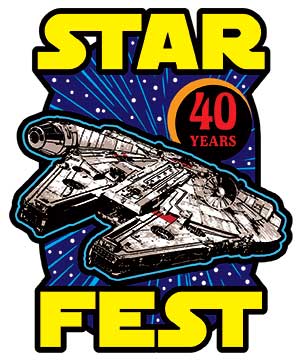 News
May 12, 2017 admin 19 Comments 2017, colorado, convention, denver, fest, sci-fi, scifi, star, star fest, starfest
This year, StarFest was held at the Marriott and Hilton DTC Convention Hotels over the weekend of April 21st. The 2017 event marked their 40th Anniversary, and for such a big occasion, they certainly did not disappoint.
As always, StarFest worked in conjunction with a variety of Fests, ensuring fun for nerds from all walks of life. Fests included ArtFest, ComicFest, WhoFest, HorrorFest, KlingonFest, ModelFest, RoboFest, GameFest, and ScienceFest.
ArtFest exhibited many different styles of artwork, submitted from creative convention attendees. Artwork included intricate bonsai trees made of paper, scrap metal robots, steampunk sonic screwdrivers, and a clock that looked like a moon, among many other unique treasures.
ComicFest took place at the Crowne Plaza Hotel, and appeared to be more of an Artist’s Alley than a festival. Traveling and local artists alike displayed their comic-style artwork in the hopes of selling prints and earning renown. Older Marvel and D.C. comic books were available for purchase, as well as POP! figures and action figures.
WhoFest brought together Whovians from all over Colorado, allowing fans of a feather to nerd out together. Panels featured everything from kid’s games to writing Gallifreyan, and they even included a cosplay meetup where attendees could relay the history of all their favorite costume pieces.
HorrorFest provided far more than horror. From body painting to stunt driving intros, HorrorFest set the stage not for fear, but instead for creativity.
KlingonFest taught you all things Klingon, from the language to culture to breakfast etiquette. Panel attendees arrived excited and left both educated and satisfied.
ModelFest featured several meticulously painted models, most notably of which was a model of the Millennium Falcon, measuring approximately three feet across. A life-sized TARDIS was also featured at ModelFest, which provided plentiful photo opportunities. Airbrush classes were offered at an additional charge, giving attendees the opportunity to get some hands-on experience with an airbrush.
RoboFest sported some of our favorite robots and droids side by side. Various versions of B-9 and R2D2, each with their own applications and quirks, covered the counters of RoboFest. One such droid doubled as a phone!
While GameFest had the expected board games, card games, and tabletop RPG’s of a typical gaming fest, they also had two LARPing groups: Dystopia Rising and Alliance. Both groups held miniature LARPing games, in which players used padded weapons to fight against necromancers, ghouls, zombies and more.
ScienceFest brought the “sci” to this sci-fi convention, and went into depth with the current exploration of the final frontier. Panels were all space-based, whether it was to discuss its past, present, or possibilities.
Overall, Starfest was jam-packed with fun for the whole weekend. In addition to the fests, StarFest’s costume contest and charity ball were the cherry on the cake. There were a multitude of things to do every moment of the weekend. As they say, time flies when you’re having fun, and the weekend flew by before we knew it. If only the StarFest TARDIS was real, we could go back and do it all over again!