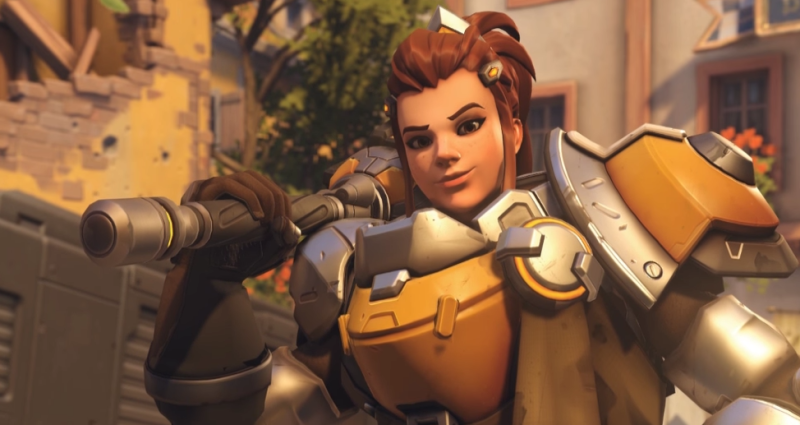 Brigitte, daughter of Torbjorn and goddaughter to Reinhardt, is the newest playable character in the popular online co-op game Overwatch. Listed as a support character, she sports a mechanized flail, that swings on a chain, and a shield that she can use to bash and stun opponents. She also has a repair pack that she can toss at nearby allies for 150 health regeneration and up to 75 armor points over the character’s base health stat. Her ultimate, when activated, allows her to move faster and supply nearby friendly units with 30 armor points per second for up to 150 armor.

As the story goes, after Torbjorn lost his arm, Reinhardt refused to leave his side as he recuperated. Torb swore that if Rein would just leave, then he could name his daughter and be her godfather. And the rest, as they say, is history. Her first speaking appearance was in the Blizzard short Honor and Glory in which she tries to convince Rein that he has no obligation to rejoin the Overwatch team. The video can be found here. But, be warned. It is a massive gut punch to the heart and then you’ll have to explain to anyone near you why you’re suddenly ugly crying. If your heart had nuts, this video would land a kick right in them.

As far as her playability, she’s a blast (pun intended). There is nothing quite like macing a Genji player right in the face or shield bashing an unsuspecting enemy. Her healing ability even makes her a strong asset if the team just needs a little more TLC to reach sweet, sweet victory. And yet…

I can’t help but feel a bit like she’s got a “jack of all trades, master of none” sort of deal. Her shield isn’t big enough to really protect anyone but herself, which makes Reinhardt a more preferable choice. And her healing ability can only be used on one person. Personally, I would probably go with Soldier 76 if our team needed a soft healer, mostly because his healing ability affects an area and can heal multiple units.

Heck, even Torbjorn can create Armor packs and doesn’t need to use up an ultimate to shore up teammates.

But she’s still really fun to play with and her novelty means that players will be picking her for many matches to come. Keep up the good work, Blizzard!