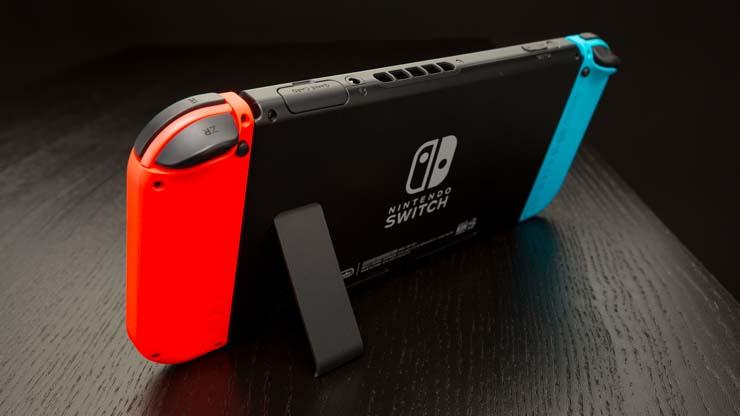 It has been ten months since the Nintendo Switch hit the shelves. And since then, it has become the best selling console in the nation. But some, like me, have their doubts. It was a breakthrough concept. A console that hooks up to your television, but can also be used for portable gaming? Sign me up! I’ll take ten. I even like Nintendo’s clever plan to deter children from eating the cartridges by making them taste like dead skunk butthole dipped in swamp water. I was on board from day one. Stupid color controllers and everything.

I didnt finally pull the trigger on buying one till this past December because, lodged deeply in the back of my brain are a couple warning signs that, try as I might, I just can’t overlook. For one, portable gaming inevitably means a bit of a dip in graphic quality. Not to brag, but my television is pretty big. And when I hook that bad boy up, I can definitely see a drop in quality. It’s not so bad with cell-shaded games like Breath Of The Wild (which, Oh My GOD, I love that game so much, I want to marry it and have its beautiful babies). But, with more graphic-heavy fare, it’s going to be insurmountably distracting. Of course, I can now continue gaming while pooping, so it’s an acceptable trade-off.

This guy gets it.

My second problem is with Nintendo itself. Now, I know a thousand fanboys out there just shat themselves in unison, but bear with me. The love/hate relationship that Nintendo enjoys with third-party game developers, leaves their game library a bit lacking. Especially compared to their competitors. You may think me a bit crazy, but I lost all interest in the Super Mario franchise back in fifth grade. So, for a company that shoehorns multiple iterations of their favorite cartoon plumber into each generation of their consoles, I was understandably hesitant about the $300 price tag.

But, once again, Nintendo managed quell all of my concerns with one little word:

A port is when a game company creates versions of already existing games for their current system. They carry an undercurrent of nostalgia that Nerds like me go bananas for. And that’s exactly what Nintendo is banking on as it seems to be The Switches new bread and butter. My personal favorite is the new Dark Souls: Remastered which is going to be released in May. Now, I can die on the go the way the gamer Gods intended. Their upcoming release schedule also includes Payday 2 and The World Dies With You, both of which have me screaming “take my money” in my sleep as I dream of the day I can sit on the bus or in the Nerdfeed break room and play my favorites while completely ignoring my ever-growing pile of work.

My final problem with this new-ish system is the battery life as it supposedly portable. It manages to last a couple hours before dying, but for the serious gamer, that’s no time at all. And for some reason, the “geniuses” at Nintendo R&D put the charging port on the bottom which renders the kickstand on the device virtually useless. But, judging from Nintendo’s current rate of problem solving, I half expect them to run everything on sunshine by this time next month. So they get a bit of a pass here.

All in all, I think it is safe to say that I am smitten. This generation seems more fleshed out, more realized than whatever the hell the Wii U was supposed to be. $300 is a big price to pay for a system that basically runs on a cellphone’s processor, but I bit the bullet back in December and, so far, I haven’t regretted it. And if their schedule of releases is any indicator, I wont for a very long time.

Be sure to check us out on youtube, all the social medias and our brand new Patreon page!

One thought on “My Switch Review (Ten Months Later)”