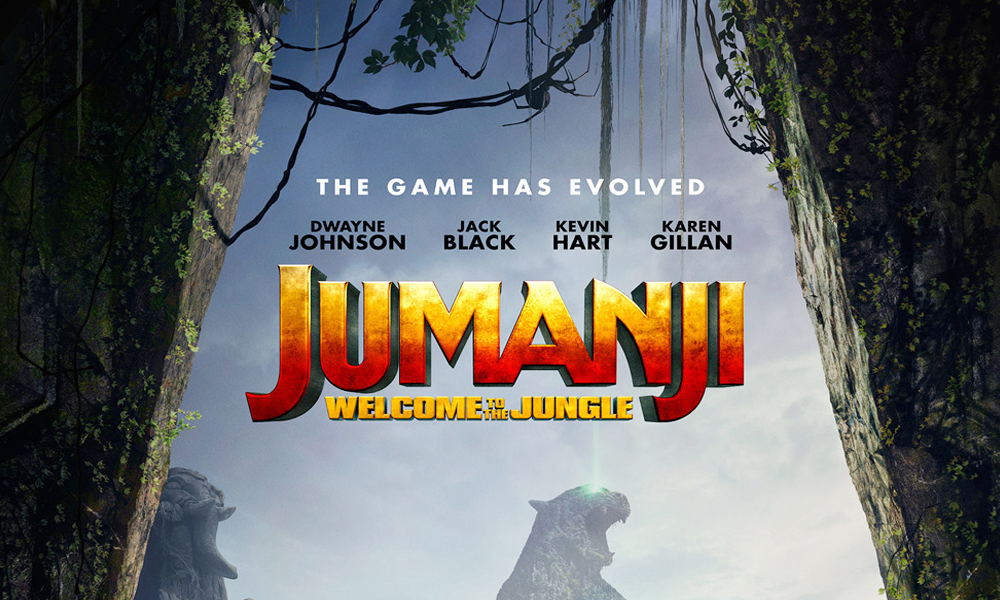 With the recent theatrical release of a massively anticipated 80’s nostalgia adventure, I wanted to spend just a moment of your time on a largely overlooked 90’s nostalgia adventure because I am either a non-conformist or I have no idea what I’m doing—possibly both. In any case, I’m talking about the December 2017 flick, Jumanji: Welcome to the Jungle. This weekend I went to the discount theater that plays movies that have gone to home media already and, at the request of my mom, ended up seeing it.

At some point, I vaguely remember seeing one trailer for what I thought would be a Jumanji remake, to which I doubtlessly remarked, “Who asked for that?” My sentiment was shared by the public and critics alike after its 2015 announcement; there was much internet vitriol generated from Robin Williams passing scarcely a year prior, with E!News even referring to the project as “unnecessary and kind of insulting”. Its production timeline was all over the place, due primarily to scheduling conflicts with Dwayne Johnson and Kevin Hart, and the release was pushed about a year later than had been originally announced. In that year, I had plenty of time to forget about it again. When it finally came to theaters, my attention was on the next installment of the Star Wars saga, and it came and went unremarkably, hardly a blip on my radar. Its public reception was better than I thought though, with it ranking at box offices in second place behind The Last Jedi in its first two weekends, overtaking to first place in its third weekend, and as of April 2018 grossing $949.6 million worldwide. Critical reviews were mixed; Rotten Tomatoes gave it a 76% approval rating and an average rating of 6.1/10, CinemaScore audiences gave it an A–, and MetaCritic has it at a 58/100.

This weekend, popcorn in hand, I was prepared to be at worst insulted and at best unenthused. Frankly, I was surprised. It was not at all a remake as I had assumed, rather a remarkably amusing sequel to the original Jumanji from 1995. It wasn’t anything I will purchase for my own collection, but I’m glad I saw it, and it was enough that I felt compelled to draw your attention to it here. Jumanji, in its classic wooden box, washes up on the beach in 1996 and falls into Alex’s unsuspecting hands. He scoffs, “Who plays board games?” and sets it aside. True to its nature, the game wants to be played, and transforms itself into a cartridge for Alex’s video game console, pulling him in as soon as he presses Start. Time passes, and the game winds up in the old junk-room at the high school. We’re introduced to our main cast of characters: Spencer, Fridge, Bethany, and Martha. They all end up in detention together, where they find themselves pulled into Jumanji as well. Within the game, they are trapped in avatars of complete opposition to their own personalities. The team must join forces through the power of friendship to reverse the curse on the land of Jumanji, beat the game, and return home to the real world.

There was something missing in the plot; it was simultaneously doing too much and not enough, to the point it undermined my suspension of disbelief. I had the feeling that the in-game universe had not been fully fleshed-out, despite spending a majority of the film romping around in it. The objective is to save Jumanji from the Jaguar’s Curse, but the only effect of the curse seems to be the dreary weather. The avatars only have three lives before Game Over, but there were some inconsistencies that led me to feel that wasn’t all that serious. For instance, our four heroes have met up with Alex’s avatar, who leads them through a treacherous tunnel to escape a brawl in the bazaar, and Alex is able to advise them on each and every danger just in time, like poison darts shot from the walls, blades from the floor, and a rickety plank bridge over crocodile-infested waters. If I had played a game enough times to have the dangers memorized, it is probably because each of those dangers had made me re-spawn at least once apiece. But Alex’s avatar has only lost two lives in the entire time he’s been in Jumanji, one of which he lost when his plane was shot down in an attempt at completing the next level. So is he just really good at video games, in which case how didn’t he beat it and escape on his own? Do none of these obstacles kill you, in which case why bother dodging them at all? Is there a way to obtain extra lives somewhere in the game, in which case who cares that they only have three lives at all? In the “real world” our characters are the standard five teenagers, though I did appreciate that it seemed like the writers leaned into the tropes rather than falling flat in an attempt to fight them. I was unfamiliar with all of the young actors, but I hope they reappear on the silver screen, as each of them was solid in their own right. Alex (Mason Guccione) is an average mid-nineties metal-head teenager, and our first Jumanji player. Fast-forward twenty years and we meet Spencer (Alex Wolff) is a meek geek who is frightened of everything. He has been doing homework and assignments on behalf of Fridge (Ser’Darius Blain), the beefy jock. The two end up sent to detention for their lack of academic integrity. Martha (Morgan Turner) is a studious wallflower who gets in trouble for refusing to participate in gym class. Bethany (Madison Iseman), the vapid bimbo, receives her detention sentence for blatantly video-calling on her cell phone in the middle of a quiz. During detention they find Alex’s old console, Jumanji still intact, and hook it up to the TV on the A/V cart.

Spencer becomes Dr. Smolder Bravestone (Dwayne Johnson), archaeologist and hero of the Jumanji story; among his strengths are stamina, smoldering intensity, and boomerang, whereas his weaknesses are listed simply as “none”. Fridge selects Franklin Finbar (Kevin Hart), since his nickname appears to be “Moose”; Finbar is a zoologist, backpack guy, and with a nickname like “Mouse”, obviously a sidekick to Dr. Bravestone. Martha becomes Ruby “Killer of Men” Roundhouse (Karen Gillan); she’s skilled in three martial arts including “dance fighting”, and as any female video-game archaeologist, scantily clad. Bethany, after selecting her character based on the tagline “curvy genius”, becomes Professor Sheldon “Shelly” Oberon (Jack Black), rotund and bearded cartographer. Later we meet Alex’s avatar, Jefferson “Seaplane” McDonough (Nick Jonas), pilot, guide, and bartender.

Of course, there were the standard “body swap” tropes as to be expected, but it seemed like all of the actors had an absolute blast taking on their anti-selves. Aside from precisely one too many dick jokes, Jack Black’s portrayal of a teenage girl trapped in a middle-aged man’s body was genuinely entertaining. Watching Dwayne Johnson being frightened out of a tree by a squirrel was a sight to behold. Karen Gillan’s awkward flirtation sequence had me in stitches— dat lip bite doe. Kevin Hart played six-feet-squished-into-five-feet perfectly. Nick Jonas was a great mysterious badass (though he was the only one whose “real-life” character seemed to match his avatar).

This flick was dabbled with 1990s wink-and-nod references, but none of them felt heavy-handed. The old wood-paneled TV with a VCR attached on the tan A/V rolling cart tucked away in storage felt like a smile to my own school days. Dwayne Johnson provided the People’s Eyebrow upon his character’s introduction, and during the bazaar fight scene uses his signature Rock Bottom move on one of the baddies. There are allusions to Jumanji, such as the shrines in the jungle being the same animals as the game tokens from the original, the layouts of the map and the board game matching, and the villain being named Van Pelt. My favorite was a nod to Robin Williams, “Alan Parrish was here” is etched into the railing of the hut Alex brings the team to, and Alex gently remarks it’s not his hut but he’s just staying there as if to say there is no intent to replace the original. Overall, it was a heartwarming romp, nostalgic for us 90s kids who remember, but able to stand on its own. If you get the chance, see it at your local discount theater, especially since many of them are family-owned and supporting small businesses is what the cool kids do. Or, y’know, pick it up from a rental kiosk, cause that’s okay too. It’s a solid rainy-day movie, and I think you’ll enjoy it.

Primary administrator of the NerdFeed Instagram, article contributor, & all around pretty cool chick.