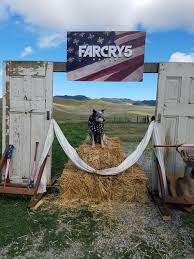 Hello, dear readers. I am back. Sorry that it’s been so long. But like most of you, I’ve been playing the new Far Cry game during most of my waking hours. But, I have stopped long enough to write this piece and then it’s straight back to the oh-so-addictive grindstone. So let’s jump right in, shall we?

So far, I’m about two-thirds of the way through, which is to say I’ve beaten John and Faith. It’s really hard to tell considering, like most Far Cry games, there’s just so much to do. The gameplay is the usual fare for the franchise. You run around and shoot the baddies while liberating whatever locals you’re playing Messiah for this week. In this particular iteration, you’re fighting a cult known as Eden’s Gate, and the locals are mostly agrarian farmers in Montana who have a rather disturbing obsession with trucker hats and military-grade hardware.You meet a host of colorful characters that can come along with you on your journey. People like Sharky the flame-throwing, pants-hating anarchist, and Adelaide Drubman, a straight talkin’ pilot who REALLY loves her helicopter.

And. Of course, Boomer. He’s a good boy and I’ll fight anyone who says otherwise.

The point is that It’s a fun game that will keep you glued to your screen for several solid hours. But is it the best one?

Well… The short answer is “No.” Okay, end of article. Thanks for stopping by!

See, half the fun of playing a Far Cry game is the exotic locals. It’s all about how an unlikely hero gets dropped in a land they’re unfamiliar with and has to fight their way out, usually while discovering how much of a badass killing machine they are in the process. Your nemesis reveals themselves to be a corrupt King or a charismatic leader of a pirate gang and you do your best to shoot them in the face at any given opportunity. Simple and fun. But a cult leader in Montana? I mean, it makes sense for Ubisoft to pick this locale if you buy in at all to my last article. But you start to ask yourself little questions like “why aren’t there any Feds? Maybe some National Guard troops?” I mean if history has taught us anything, it’s that cults don’t hold up very well to institutionalized scrutiny and they’re are also pretty flammable.

So right off the bat, the suspension of disbelief is pretty hard to keep intact while you’re playing.

Also your playable character has the personality of a particularly boring potato. In Far Cry 3, you play as Jason Brody, a dude-bro that goes on vacation with his friends only to be swallowed up into a conflict that he must fight through to save himself and his friends. By the end he realizes that he has evolved into something more and there’s real catharsis in that.

In Far Cry 4, you play as Ajay Gale who returns to his native country to spread the ashes of his deceased mother. He finds himself at odds with the king and the rest is shooty-‘splody fun for the whole family.

In this latest iteration you play… Rookie… Or Rook or Newbie, depending on who you’re talking to. You’re a nameless protagonist that was a cop and now shoots people pro-bono. No name, no motivation other than getting your helicopter smashed up. You’re just here to chew bubblegum and hit cultists with a shovel… And you’re all out of bubblegum. It’s okay, but it’s a little boring.

It’s still a Far Cry game and there’s plenty of fun to be had, but it’s certainly not the best. If you are looking for a little more to chew on, there’s always the early chapters to run through.

One thought on “Far Cry 5 Review”