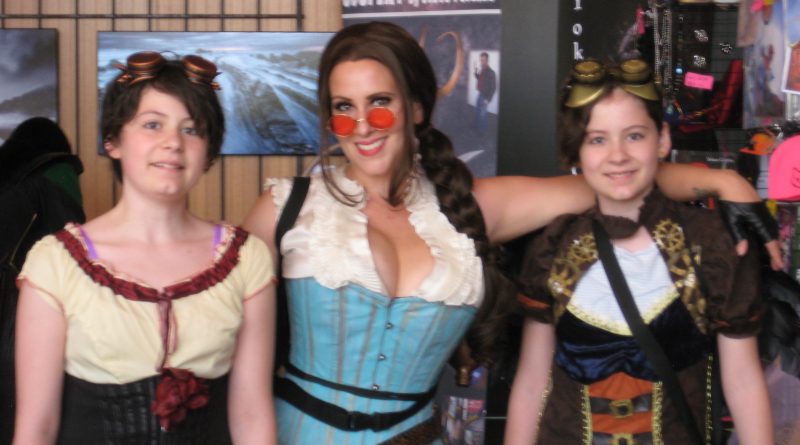 Blissfest’s 1101 Experience MiniCon is in its third year and growing quickly. The 1101 MiniCon, as the name suggests, is a small, one day convention that takes place in Littleton, Colorado, and is free to anyone that cares to partake in the day’s festivities. Many people in the Colorado convention community have never even heard of this small annual event, but as word gets out, the convention’s attendance is bound to grow rapidly.

The 1101 MiniCon and its related events, which can be found on Blissfest333.com, are organized and hosted by none other than Colorado’s Michael Bliss. Bliss began Blissfest in memory of a dear friend who passed several years ago, and he hopes that his events can bring people together in a culmination of arts, festivities, and fun. Featured above, from left to right, are Ralph Giordano, the production director; Michael Bliss, the technical director; and Michael’s wife, Bonnie Bliss.

The 1101 MiniCon, specifically, is a tasteful blend of the cosplay and steampunk worlds. Events include a meet and greet; a few local band performances including Blackout Love and Clockwork Beast; panels covering photography, cosplay, and steampunk; a costume contest; the Bliss Awards; and a dance party with D.J. Rexual (www.gravity.life) at the end of the evening.

This year’s costume contest was judged by Yokaze of Yokaze Cosplay, artist and cosplayer Robrecht Berg, cosplayer/actor/stuntsman Steven J. Perkins, and Steampunk enthusiast David A. Guffey. Cosplay contest prizes consisted of $25 coupons for merchandise from Funkmaster Lovecraft Studios, two of which were awarded in the evening: one to the best cosplay, and one to the best steampunk costume. Anyone can sign up for the costume contest on site before the contest begins, including any last-minute or first-time cosplayers. An example of work done by David A. Guffey

The Bliss Awards are a series of awards given to amateur and advanced film makers for creative short films. Submissions are accepted throughout the year and can be submitted on www.Blissfest333.com. For those looking to build their steampunk wardrobe, the 1101 MiniCon provides ample opportunity and a plethora of vendors, many of which handcraft each item, so you can be sure your look will be unique. A few of the vendors present at this year’s convention include the previously mentioned Funkmaster Lovecraft Studios (www.FunkmasterLovecraft.com); Thrifty Gryphon (www.ThriftyGryphon.com), “creator of bracelets, handmade gifts, and more from repurposed materials and the creativity of the mind”; Honest Harry’s, maker of “used weapons, widgets and what not”; and Martha MacGyver (www.etsy.com/shop/MarthasMacGyver), a shop filled with handcrafted curiosities ran by proprieter/crafter Beth Hurdlock. Additional features include artist “Agent Jess Master”, a creator of steampunk themed paintings and props (he can be found on Facebook and YouTube with the handle “/AgentJessMaster”); Airship Iron Opal, “a NOCO based social airship for all ages” (www.facebook.com/groups/AirshipIronOpal); and SassyKnot Photgraphy (www.rusticknotphotography.com), “specializing in photography that takes clients back to the time of Glamour and Simplicity, the art of Classic Vintage with a modern flare”. Some of Agent Jess Master’s work Blissfest’s 1101 Experience MiniCon is expected to return next fall at the same location, the 1101 Event Center in Littleton, CO. More information can be found at www.Blissfest333.com.