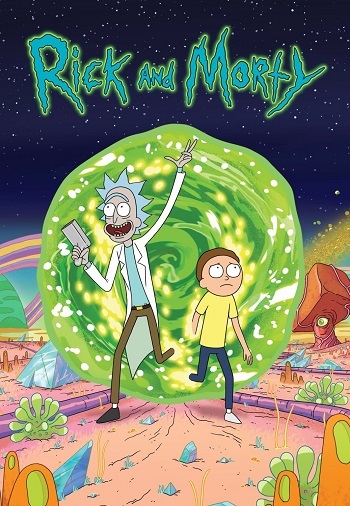 Rick and Morty is back, ya’ll! After almost two years of waiting, the much anticipated third season finally premiered on Monday. For those of you who are unfamiliar with the raunchy sci-fi comedy, the show stars a cynical, alcoholic scientist (Rick) adventuring across the galaxy with his timid, fearful grandson (Morty). Together, they find themselves in all sorts of situations and must find a way out, usually in a thoroughly entertaining fashion. From landing on a cat planet in the middle of their own version of the purge, to being mind-probed by giant insects, and even turning everyone on earth into giant praying mantises, these two have seen and done it all. (Of course, it must be said: This show is for adults, so don’t be one of those parents that plops their kids in front of a “cartoon” they did no research on, and then get mad at the show-runners and network for its crudeness.)

The original concept for the show came from Justin Roiland, who made an animated Back To The Future parody called The Real Animated Adventures Of Doc and Mharti in an attempt to piss of Universal Studio’s lawyers. “Why” you might ask? Nobody is entirely sure. He was five when the original movie came out, so it wasn’t a residuals dispute or anything. I guess some people just like stirring the pot. Anyway, Roiland eventually submitted it to the Channel 101 short film festival, where one of the judges was none other than Community’s Dan Harmon. And the rest, as they say, is history.

As soon as Rick and Morty premiered back in December 2013, it immediately accrued a massive cult following. Of course, it’s easy to see why. With such darkly clever writing, weird looking characters and infinitely fascinating set-pieces, it’s pretty obvious why so many people have flocked to it. Or as a real television critic puts it:“Rick and Morty takes what would be in any other creator’s hands a wacky sitcom plot” writes Sabienna Bowman, a critic for TV equals and Rotten Tomatoes, “and turns it into a demented, wickedly funny half-hour of animated child endangerment and inappropriate sex jokes.

But, Rick and Morty’s sense of humor doesn’t just end with the show. The creators like to pull pranks on their audience as well. Earlier this year on April 1st, the very first episode of the new season was released and advertised on twitter. Of course fans, noting that it was April Fool’s Day, saw the news on their feeds and immediately wrote it off as just another joke. It wasn’t. If twitter users followed the link provided, they would find the season premiere playing on a loop until midnight from coast to coast, employing a release strategy completely consistent with Rick and Morty’s sort of Meta-sarcasm humor.

So, if you consider yourself a nihilist who loves dark humor and genuinely fun shows, head on over to Adultswim.com and check out the new season. If you want to watch the first two seasons, they can also be found on Adult Swim’s website as well as the Hulu streaming service.

One thought on “Rick and Morty Is Back, Ya’ll”